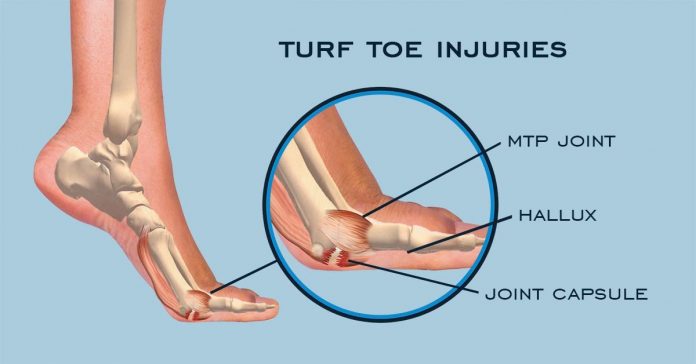 Sports injuries are oftentimes as individual as the sport itself. The symptoms, long-term ramifications, and treatment sometimes relate directly to the sport (like football) or are more widespread, like the sports hernia, which is common in several sports. Turf toe is an injury that afflicts football players mostly, but also affects other athletes who perform on an artificial surface.

Toe injuries—the ingrown toenail, for example—sometimes seems like a minor injury, but can be more serious than they appear. Turf toe is a sprain to the big toe that occurs in the joint, and tears the connective tissue between the toe and the foot. The clinical term for the injury is metatarsophalangeal joint sprain. It occurs most commonly on artificial surfaces, but can also result from other athletic activity on hard surfaces.

This injury is particularly problematic for wide receivers and running backs, as they must accelerate quickly, push off using the toes, jump, and change directions, which leaves them more vulnerable to a sprain. As the toes cannot be used during the healing process, the injury is debilitating for those afflicted with it. The injury usually requires a month to heal and can keep a player sidelined for several games.

How to Treat Turf Toe

Turf toe is not treated the same way that one would treat the traditional sprain. Because the foot and its uses are unique, the joints cannot be taped or braced. Instead, one might try and isolate the toe to keep it from bending. Ideally, the toe itself should not be used. Some also use shoes with a strong sole and cushioned inner sole, and sometimes use physiotherapy.

In recent years, Turf Toe has afflicted its share of star players in the National Football League, in addition to more anonymous players.

While with the San Francisco 49ers, wide receiver Terrell Owens suffered from Turf Toe and was forced to sit out for a game. This is one example of how offensive players, particularly wide receivers tend to be prone to the condition. Tight ends seem to be less affected by this injury.

The last NFL season saw its share of Turf Toe injuries to star players. In the same week, San Diego Chargers running back Ladanian Tomlinson and the Oakland Raiders’ Darren McFadden were both reported as having suffered from a Turf Toe injury. Though the injury seems small, it does often sideline significant players—particularly receivers—and poses a serious threat to their team.