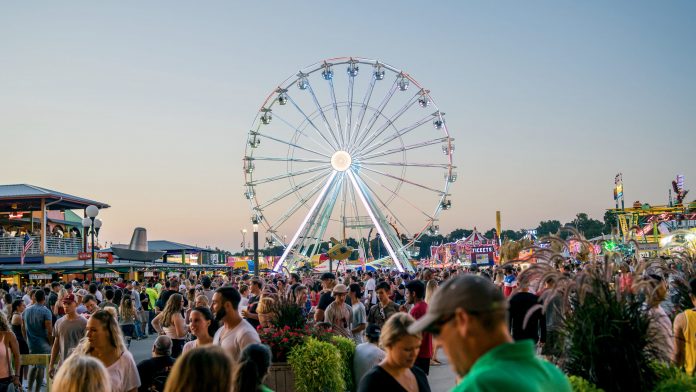 The Iowa State Fair attracts nearly a million people each and every year. Why do so many people flock to Des Moines, Iowa in the middle of August to partake in this 11 day extravaganza? Well I presented this question :” What’s so big about the Iowa State Fair?” Nobody responded the same way.

For some The State Fair is a Tradition. These people go to the Fair at least once every year, they might stroll down the Midway, ride a few Rides, win a Stuffed Bear, eat a Corn Dog or one of the other 50 foods that come on a stick, before stopping at the Bud Tent for an Ice Cold Beer.

For others the State Fair is more of a passion. These people take their Vacations during the Fair, they Camp at the Fair’s 160 acre Camping Facility and some even take jobs at the Fair just to get in free! “I go everyday”, said a man who identified himself only as Eastside Bob. “Where else can you milk a Cow, enter a Hog Calling Contest, go to an Automobile Race and A World Class Concert all in the same day? You can’t get this much free entertainment anywhere, other than maybe Las Vegas.”

“I just love the sights and the sounds, the smell of all the great food, the people, there’s always something going on. I wouldn’t miss it for the World, there’s no place I’d rather be.”, said Dawn Richmond of Wapello, Iowa.

“There’s something for everyone”, added Tom Baker. “I like the Agricultural part of it, the History. It’s neat to see how people Lived and Farmed a hundred years ago. And the Farm Animals are impressive. A 3000lb Bull? Whew, that’s a Big Boy!”

I have to agree with Tom, with eleven Grandstand Concerts, over twenty five Entertainer’s performing on Free Stages, Talent Shows, Pie Baking Contests, Car Race’s, Animal Shows, Rides and Attractions, Vendors selling everything from Tennis Shoes to Speed Boats. The Iowa State Fair does have something for everyone.

So If you haven’t been, I urge you to go, and see for yourself, What’s So Big About The Iowa State Fair.